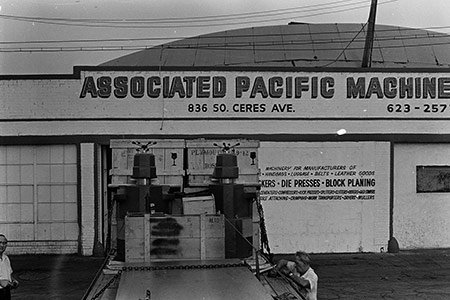 APMC opened its first factory in Los Angeles in 1966.

Associated Pacific Machine Corp. has a deep history rooted in innovation that started from a prevalent industry throughout history — shoes.

In 1905, Daniel Wax’s grandfather owned a shoe factory in Worcester, Massachusetts, which firmly established the Wax family in the shoe industry and what the family business would later evolve to. In 1966, APMC was incorporated and opened its first headquarters in Los Angeles to supply machines to the growing shoe manufacturing and leather goods industries that were located in and around the local area. In the early days, there were over 300 shoe and leather goods factories in LA alone.

Because the company’s new vision stretched beyond the shoe industry and the West coast. APMC’s customer and vendor base became international. APMC went to Europe to find machine suppliers that would not only improve operations in the shoe industry, but also provide machines to service other industries that needed better and more efficient cutting capabilities. 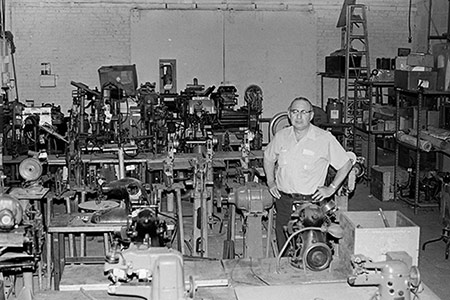 APMC is a family business that has supported our clients in the manufacturing industry for more than half a century. Our family’s roots in the industry can be traced as far back as 1905.

The first company that guided APMC in their new direction was Vilh Pedersen from Denmark, which guided and introduced the company to machine tool centers, mills, and industrial die cutting equipment. The second company was Atom from Italy, which at the time made die cutting machines for the shoe industry and contributed to the success of APMC.

After Robert Wax assumed control of APMC, the company experienced successful years of progression and innovation due to Bob’s desire for expansion in other industries and into large area industrial die cutting markets.

Growth Into an International Company Serving Many Industries

Although the company was faced with various obstacles that are normally detrimental to the progression of any company, APMC continued to make strides in the right direction. The company changed from being a regional West Coast business catering to shoes and leather goods to an international business selling to aerospace, automotive, bags, computer, foam, furniture, gaskets, packaging, plastic cards, converting, rule bending, and other industries. 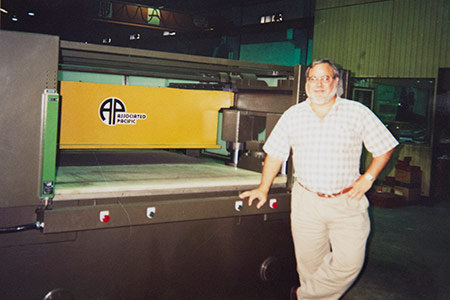 The company has expanded over the years to serve clients internationally.

During the 1980’s, Associated Pacific Machine made a progressive move by hiring Erik Jacobsen as a consultant to design a new line of hydraulic die cut presses and automatic feed systems to be produced in Taiwan. The first 100 ton press had a design that was scalable with the capability of going down to 30 tons and up to over 300 tons; moreover, the bed size could be as large as 78” x 120” with six different feed systems that were designed to revolutionize modern die cutting hydraulic presses.

Proudly Supporting Our Customers for more than Half a Century

APMC has been an importer and distributor of a diversified line of industrial die cutting machinery, providing sales and service to manufacturers since 1966. APMC has evolved into automated systems that involve die cutting, die-less cutting, laser cutting, routing, lamination, and steel rule processing as the cutting and converting industry has continued to evolve.

Our relentless innovation has helped us grow from our beginnings helping make the shoes people walk in to support a wide range of critical industries including automotive and aerospace to name a few.